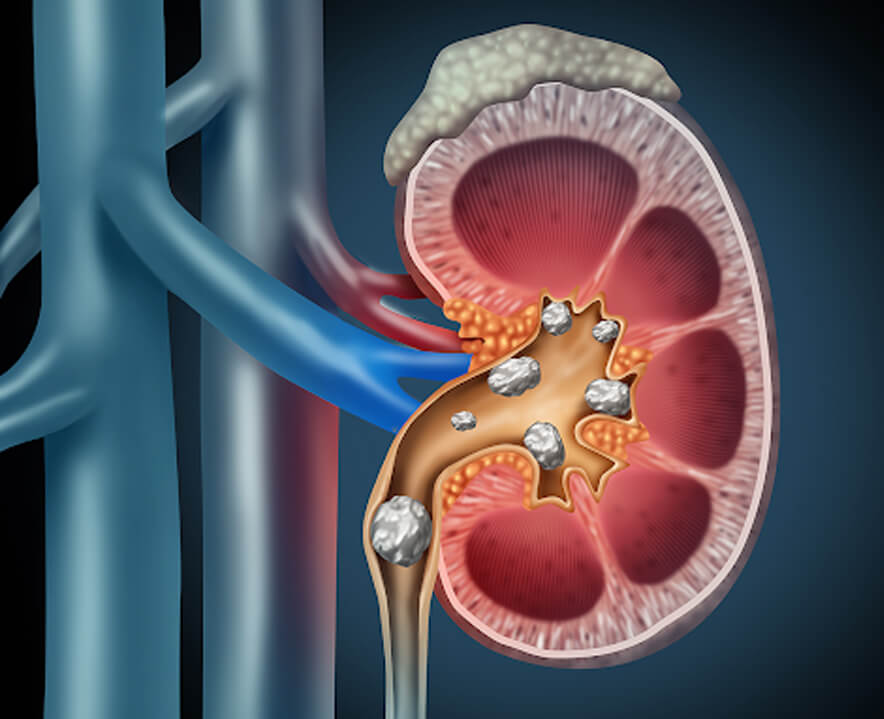 Kidneys are bean-shaped organs that work in pair to remove waste and fluids from human blood. In some cases, when there is an excess of certain wastes and less of fluid in the blood, the wastes stick together to form clumps called a kidney stone.

What is Kidney Cancer

What is the Prostate?

What is a Kidney?

5 Shocking Everyday Food Items that can cause Kidney Stones

Everybody is susceptible to having a kidney stone; however, some people are at a higher risk of having it than the others. Some cases where the person is more likely to have kidney stone is:

For patients with a larger kidney stone, there could be any of the following symptoms:

The treatment of kidney stones primarily depends on the size of kidney stone, what it is made of if its causing pain or not and whether it’s creating a blockage in the urinary tract. In order to find an answer to these queries and proceed with the right course of treatment, the patient is recommended to undergo urine test, blood test, x-ray, CT scan, etc.

In cases where the test results reveal a tiny kidney stone, the doctor usually prescribes pain medicines and suggests the patient to consume plenty of fluids to push the rock out through the urinary tract. However, in case the kidney stone is found to be large or placed at a position to block the urinary tract, further treatments are conducted.

In the case of large kidney stones, one of the treatments is shock wave lithotripsy. Under this treatment, shock waves are used to break large stones into smaller pieces. These small pieces would then pass through the urinary tract and flow out of the body with urine. This is a small procedure that takes around 45 mins to 1 hour to complete and is done under general anaesthesia.

Another course of treatment for kidney stones is ureteroscopy. Under this procedure, the doctor uses a long tube-shaped tool to trace the stone and remove it or break it into small pieces. If it’s of a reasonable size, the doctor intends to pull it out. If not, a laser is used to break the stone into small pieces so that it can pass through the urinary tract along with urine. In some very rare cases, a surgery called percutaneous nephrolithotomy is conducted to remove a kidney stone. During the surgery, the doctor inserts a tube directly into the kidney to remove the stone. Compared to other procedures, the surgery is complicated, so is performed only on critical cases and the patient usually two to three days to recover from it.

The best way to prevent kidney stones is to consume adequate fluids every day. People are usually required to drink eight to twelve cups of fluid every day. In case anybody has kidney issues that require them to consume a limited volume of fluids, the doctor should suggest the best amount of fluid for them. Avoiding excess consumption of sodium and animal protein in the everyday diet can also prevent kidney stones. If the doctor is able to figure out the composition of the kidney stone, he/she might give specific diet recommendations to avoid similar kidney stone formation in future.

In the case of health conditions that make the patient more susceptible to kidney stones, the doctor might recommend medicines to deal with the condition.